Even with Friday night’s winner Brad Sweet breathing down his neck, the Oklahoma driver continued to be the first car across the start/finish line every lap.

However, with two laps to go, that manifestation was put on halt. A caution came out, putting Sweet on his bumper. Flashbacks of a previous Gold up loss projected in his head.

“I was having flashbacks of, I don’t know, [2014] or something and we led the whole race,” Pittman said. “It laid rubber on the bottom of (turns) one and two and I found that. It didn’t lay rubber in (turns) three and four until the last couple of laps and Johnathon Allard snuck by me coming to the checkered. That one still stings.”

Uninterested in repeating that pain, Pittman closed the deal this time. Leading every lap, he won his second Gold Cup and fourth World of Outlaws NOS Energy Drink Sprint Car Series victory of the year.

“Hats off to this whole Roth Motorsports team to get a win here in California, the Gold Cup, the biggest race in California,” Pittman said about giving his California-based team a home state win. “To win it for Dennis and Teresa (Roth) is just awesome.” 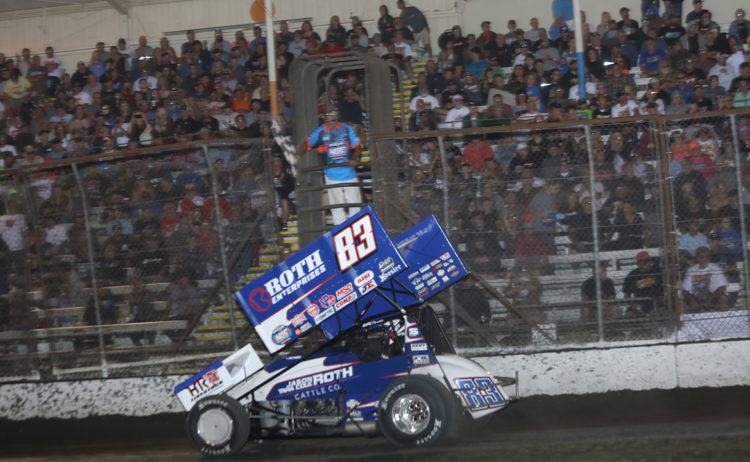 While Pittman led every lap of the 40-lap Feature, his path to victory was not immediately paved with gold.

After a 17th-place finish Friday night, Pittman and his Roth Motorsports crew needed a new approach. And a little bit of luck.

They showed speed at the start of the night by Qualifying fourth. That placed Pittman on the outside pole for his Drydene Heat race where he took the lead from Sweet at the start and went on to win.

Then luck helped out. He drew the pole of the DIRTVision Fast Pass Dash, and went on to win that, too.

He pulled away to about a straightaway lead in the first six laps of the Feature, with David Gravel in second and Sweet fighting his way past Brent Marks for third. Pittman found himself in lap traffic by that point, too, until a caution on Lap 10 for Kraig Kinser going off track in turn four.

On the restart, Gravel stayed close to Pittman and launched in front of him for the lead in turn one. However, before the field could complete another lap, the yellow lights around the speedway turned back on for Ian Madsen in the turn four wall. The lap was not completed and Pittman remained the leader.

Sweet, looking for his first Gold Cup victory in his home state, had fallen back to fourth-place. However, on a restart with 26 laps to go, after a red flag for Jacob Allen flipping, Sweet powered his way by Marks for third down the front stretch and then rode the high side to take second away from Gravel before completing the lap.

While the “Big Cat” tried to track Pittman down, Gravel, Marks, Logan Schuchart and Tim Kaeding traded slide jobs and crossover maneuvers for countless laps, arguing over who would be third. Schuchart silenced the argument by taking third with six laps to go and the leaders in his sight.

“I love working out, I love being in shape for this deal and I’ve tried doing that in the past and sometimes I don’t feel like it makes a difference, but tonight it did,” Schuchart said. “The guys in front were starting to slow down a little bit and I was able to still race it hard and jump across the spots I needed to and make a lot of ground up.”

Pittman found himself caught in heavy lap traffic, unable to always make a quick pass. Sweet and Schuchart fed off that, inching closer to the Roth Enterprises No. 83 car. Sweet even got close enough in the closing laps to dive underneath Pittman – slowed by lap cars – and take the lead.

Pushing the handling of his car to its limits, Pittman charged back around Sweet for the led the next corner, never allowing the Kasey Kahne Racing driver to officially lead a lap.

Then with a late caution, he had to hold on to that mentality for two more laps. He was not going to allow a repeat of 2014’s race. Mastering his restarts all night, Pittman put about a three-car length lead on Sweet into the first corner and kept it that way to the finish. The hope of winning was now a reality.

“My thought process was run as hard as you can on the top, because that’s what I thought it was going to take to win,” Pittman said. “I feel like at the green-white-checkered I went has hard as I had. The hard part about that is when you run hard against that tricky of a cushion, you’re putting yourself at risk to make a mistake and take yourself out. But I was more OK with trying too hard and losing than going too slow and trying to be safe.”

“He had a good enough of a lead there, no matter how good, he would’ve had to mess up,” Sweet said. “He drove a great last two laps. We gave it all we had with the NAPA Auto Parts car. I was trying to move around and got my wing back a little too far I think at one point and got myself tight. I was a great race. We gave it all we had.”

While Sweet missed out on winning another Gold Cup, his runner-up finish was his third podium finish in-a-row. In those three races he’s also cut 10-time Series champion Donny Schatz’s points lead over him down from 36 points to six.

Schatz was on track to potentially lose the points lead after taking the final transfer spot in the Last Chance Showdown to start last in the Feature. He came close to getting lapped in the first half of the race, but was able to fight his way to an eighth-place finish in the final half – earning him the Hard Charger award for the race.

For Pittman, he earned himself his 85th career World of Outlaws victory, moving him past his hero, Stevie Smith, to be the ninth winningest driver on the all-time Series wins list. He also earned himself $15,000 and another glistening golden cup trophy – his first Gold Cup was earned 13 years ago.

“There’s not many drivers that can say they were here 13 years ago,” Pittman said with a smile. “Part of that dates me. It makes me feel old. But I feel like I’ve got a lot of good years left in me. I’m having a lot of fun, especially when you get good cars like this to drive.” 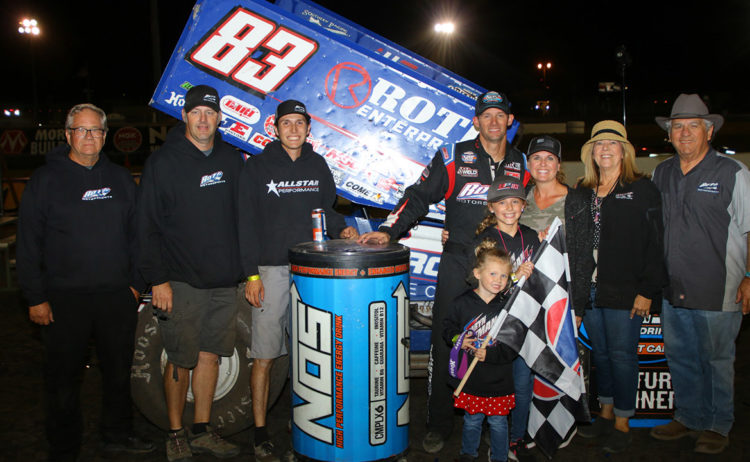 The World of Outlaws NOS Energy Drink Sprint Car Series on Wednesday, Sept. 11, will be at Placerville Speedway in Placerville. Calif. for the 49er Gold Rush Classic presented by Riebes NAPA Auto Parts.

As always, if you can’t make it to the race, you can catch all of the action LIVE on DIRTVision.com.